A long day in the saddle

Driving to Taupo the day before the race, excitement grew—along with trepidation. Would we get rain and slippery roads? Would I crash? Would my low-mileage legs hold up? Would I finish inside five hours? Would I even finish at all?

My German cycling buddy, Holger, assured me I’d be fine. Easy for him to say. He’d successfully completed the brutal 300 km Taupo Enduro the year before.

Slim and two metres tall, Holger is a rider with an indestructible diesel engine—perfect for drafting behind when we ride together. Unfortunately, on race day he would be in the elite group, starting 30 minutes before my group. I would have to find someone else to draft behind.

Race day dawned windless and sunny. So far, so good. Holger and I downed eggs, toast, muesli, and a jug of coffee. I packed a firm banana, some sports gels, and a bag of my wife’s homemade energy balls into the back pocket of my cycling jersey. After a quick bike check, we rolled to the start line in the centre of town.

Holger’s group set off first. I wouldn’t see him again until the afternoon.

My group started slow. Too slow. Everyone in the bunch was saving their energy for the long ride ahead. Nobody wanted to lift the pace and rotate turns on the front, where the wind saps your energy. This was not ideal. We were all being selfish, but all losing time as a group.

Even so, it was hard to care too much. The sunshine and rolling fields—and the absence of wind and cars—made riding itself a pure pleasure. I was in no hurry.

On one of the many gentle climbs in the first half of the ride, two bronzed whippets on wheels eased past our group. At last, a chance to pick up my pace! I rode in their slipstream and enjoyed the feeling of exertion for a change. Now I was racing! But these guys were strong. I managed to hang with them on three climbs, but on the fourth one I had to let them go.

At around the halfway mark—80 km—I hit trouble. Out of the blue, cramps in my thighs. I’d been drinking plenty of water and eating sports gels. But the heat of the sun and the extra effort of chasing the whippets had sapped my legs. Luckily, a benevolent, red-faced Englishman was on hand to lend me his anti-cramp spray. He revealed that he was recovering from four heart bypass operations. Hell, if this puffing Pom with a dodgy ticker could ride around this lake, so could I. Onward!

Stopping twice to fill my water bottles, I was caught by a group of around 20 riders going at a decent pace. After long stretches of solo riding, it was good to join a bunch again. The group included several veterans. Grey hair and deep tans. These guys know how to pace themselves, I figured.

Wanting to stay with this group for the final 50 km, I passed up the chance to stop at the next water station. Big mistake. It was now midday and the sun was at its apex. My bottles were empty. No more water until the top of Hatepe Hill, a notoriously long climb away.

Two more bouts of cramps hit me in leg muscles I didn’t know I had. Each time they hit, I drifted to the back of the bunch, trying to ride out the pain. I’d recover just in time to rejoin the group. Somehow I managed to slog up Hatepe Hill and to the precious oasis on top. After slugging a sports drink, I filled my bottles and pointed my bike downhill.

Did I crack five hours? Almost! I finished in 5h 03m, averaging just over 30 km/h. Not bad for an old geezer in his first race. Holger was disappointed with his time of 4h 50m, a long way behind the winner, who clocked in at 3h 45m. All of us, though, had to doff our caps to the guy who somehow did the whole race on a vintage penny farthing bike.

Reckon I’ll go back to race Taupo again this year. The challenge of getting under five hours is too much to resist. If I do go again, one thing’s for sure: I won’t be riding on a penny farthing. 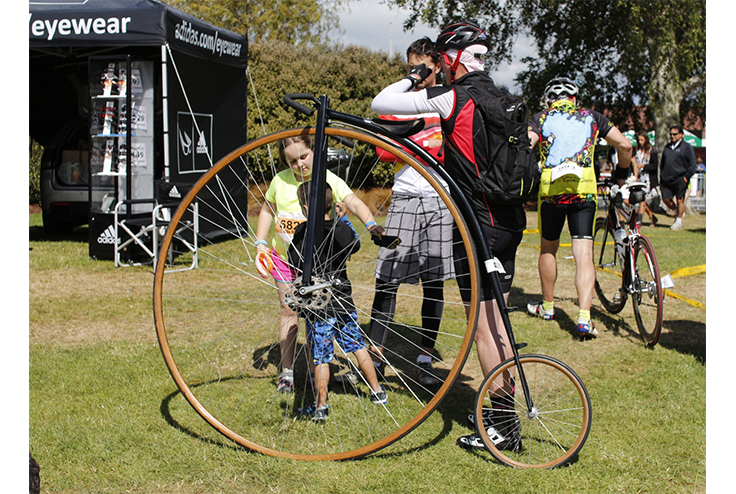 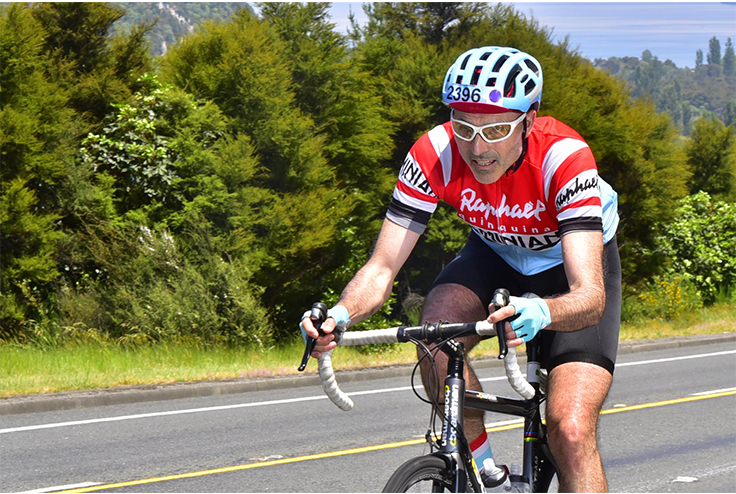